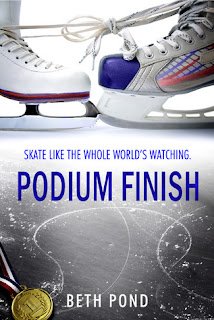 With six months until the Olympic Games, seventeen-year-old Harper's life is pretty much perfect. She's fighting for the starting spot on Team USA Women's Hockey, and for the first time ever, she has a crush on a guy who likes her back.

She feels like the luckiest girl in the world, until she runs a risky play at practice and breaks her knee, thereby sentencing herself to six weeks in a cast and possibly ending her Olympic dream before it even starts. For seventeen-year-old Alex, being anything less than the best is unacceptable. That's why, after a miserable debut season at the senior level, the former junior national singles champion switches to ice dance.
Her skating partner, Ace, is an "all skating all the time" type of guy, which would be fine, if he'd stop keeping secrets about the real reason he and his former partner broke up. Now is not the time for second thoughts, but how can Alex skate her best if she can’t trust her partner…or herself?
As the pressure to make the Olympic team builds, the girls must rely on each other, because if there’s one thing they both know, it's that the only thing harder than skating to the top is staying there.

This book was everything I hoped it would be, I accidentally came across the sign up post for this book tour. Me being an enormous skating fan, but also a fan of the Olympic wintergames, just had to sign up for this booktour. And I can't say  I regret it, because this book turned out to be one of my favourite books with sports as a theme.
Well most of the other books I read about sports, the sport it self was never the main theme. Yes it came along with the characters, but just in the background.

This book focusses on two characters, Harper and Alex. Both athletes training for a place on the American Olympic teams. This book gives an insight on how hard athletes have to train to even get to the Olympic games.

It also shows how athletes deal with injuries, this was a really interesting part because I didn't know much about it. Like how they treat sore muscles with a warm/cold water bath. And the machines they use for injuries. Those are things you don't often hear about. I found it was really interesting. Also I had never heard of ice dancing before, sure I have heard of figure skating singles and pairs but never ice skating.

My favourite part of this book was when Harper and Alex went to watch the short track match from Rye, that was so exciting, I felt the rush as if I was skating myself. It was well put and I could see the match happen right in mind! That was really cool! I am going to be on the outlook for more books like these. Also this book made me want to go get my skates, drive to the nearest rink and go skating!

This book is great for all people who love the winter games, or skating in general. It's a story about motivation, passion, friendship, love and of course the Olympic Wintergames.

I think this book is truly amazingly written, very realistic and has everything you want to hear about when you are reading about sports. Therefore this beautiful book gets 5 snowflakes from me!

" At least the ice will be freshly Zambonied, I say. Ace laughs.
" I don't think Zamboni is supposed to be a verb."

We finish a slow lap around the rink then I tell Rye I want to see him speed skate.

"It's more impressive when I'm actually racing people."
"That's okay," I say.
"You just want an excuse to look at my butt."
"No. I'll just race you then if you're going to be like that."
"You'll still have a nice view of my butt."

A dull ache crept its way into my knee on the second turn of our slow lap together. It's not painful. It's the weakness Tyler was talking about, but nevertheless, that ache is a reminder that comebacks are a multistep process.

Rye takes off, crossing his right leg over his left leg to turn the corner of the rink, picking up speed on the straights. When he passes me, a rush of wind follows him. He rounds the first turn again, fingertips brushing the surface of the ice, body at a 45-degree angle, so low to the ice that if it weren't for his speed, he'd fall over, too much speed and he'd fall as well.

I stand by the rink wall, and Rye whips by again, purposely getting close to me even though speed skaters normally try to stay as close to the inside of the track as possible. "Show off!" I call, but he's already coming out of the turn and probably can't hear me.
Posted by IceColdPassion at 10:30 PM