Movies: Guardians Of The Galaxy 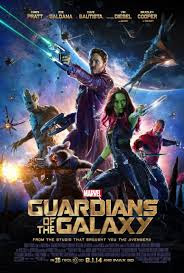 
About Guardians of the Galaxy

After stealing a mysterious orb in the far reaches of outer space, Peter Quill from Earth, is now the main target of a manhunt led by the villain known as Ronan the Accuser.

To help fight Ronan and his team and save the galaxy from his power, Quill creates a team of space heroes known as the "Guardians of the Galaxy" to save the world.

What I thought of Guardians of the Galaxy

I am not overly fond of science fiction in general, or so I always thought, because when I looking at all the movies and books I like, that is not really true any more.  So when I heard about this movie I just had to see it, why? Well it is Marvel of course!!! The Marvel movies that have been coming out the last few years, like Iron man, the Advengers, Thor (yum) ect. Comic-turned-into-movies are becoming the new big thing.

Now I am wishing someone had gotten me into comics sooner, because I think I would love them as much as the movies. I just don't know where to start with comics. So suggestions are always welcome.

Now back to the actual movie, I would like to begin with the music, which is really cool and sometimes combined with the scenes the choice of music becomes hilarious.  It is one of the aspects that makes this movie so great, and music also plays an important role in the movie, especially for Peter Quill our main character.

At the start of the movie we see, that Peter's mother dies and that Peter is then beamed up, however we don't get more of a backstory than that, which I think is too bad, I would have like to learn a bit more about Peter and about the Ravagers (the space pirates).  When Peter steals an orb all the fun (action) begins. He runs into some trouble being Gamora, Groot, Rocket and add to this the powerhouse Drax and the Guardians of the Galaxy gang is complete.

The fun thing about this group is that they are all so different, which leads to hilarious moments. The story is not all that complex but it doesn't always need to be in my opinion.

This movie kept me well entertain, was never boring, had terrific special effects, a lot of action and sometimes hilarious moments. All in all this movie for me is definitely a 5 skater movie.

Posted by IceColdPassion at 11:48 AM