Books: The Gilded Ones ~ Namina Forna 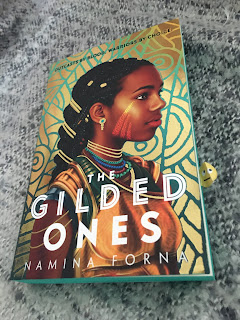 About The Gilded Ones

Are we girls or are we demons?
Are we going to die or are we going to survive?
Deka fears the blood ceremony that will determine whether she can become a member of her village.
If she bleeds red, she will belong. But on the day of the ceremony, her blood runs gold - the colour of impurity, of a demon.
She has become what she has feared all her live. A mysterious woman can take her away, to join the an army. An purpose after becoming the unthinkable.

My thoughts on The Gilded Ones

After the first chapter, I didn't know what I was suppose to think, I wasn't sure where the story was going and here is an unpopular opinion I thought it was a little too obvious black girl in a white town being shunned. I wasn't sure that if the book turned out to be solely focused on this if I would have continued. I promise you the story takes on a whole different turn and I love that the author has chosen to pick a divers cast of chacters representing people from all corners of Otera.

After the first chapter, the story got really really dark, I was surprised at how dark it was. And I loved the book for it, I think it gave the reader perspective and explains a lot of the choice Deka will make during this story. Through out the story we she how Deka is process the trauma she has been through and she here grow as a character. There is a lot of character development, which makes this a character driven story. Seeing the world through Deka's eyes, whe get to see a lot of world building, we also she the hatred towards the Alakai, the religion printed on everybodies brain. I really hate the world Deka lives in, the religion in this world is brainwashing the people.

The elders bring out buckets, gold lust in their eyes.

I love the character White Hands, the mystery about her, the small hints she drops, which Deka can't seem to figure out. What is her end game, I have wondered this from the beginning and I tell you, I was really suprised about how the story unfolded. I think that from the large cast of side characters White Hands is one of my favorites, very unique, very strategic, and full of secrets.

Then we have not yet talked about Britta, she is descriped as someone from Scandinavia but in my head she has an Scottish accent. Britta is a likeable character from the beginning, even a little bubbly, which might seem odd in this cruel world. She is so much fun, but she has depth to her as well, she also has scars..

Going back to Deka, I really enjoyed her character, I understand the decicions she makes, all but one. When they are on a raid they enter an old underground temple, with a lake in it. From the waters comes a creature, which bites Deka. Instead of getting rid of the creature she decides to keep it. I don't understand why, and I thought is was a very naive choice. In the end the creature does proof it's loyaly.

In this world there are a lot of creatures that are unique, I haven't heard of any of them, the creature that Deka found in that temple is called Ixa, and it is some kind of shapeshifting being. Very interesting, it enjoys the form of a cat but can also turn in to some big ass lizzard/dragon? like creature. Very cool!

The final battle was really something, oh by the way you will get a proper battle, I promise, we are right there on the battle field slaying deathshrieks. It all is very well written. I think this book is a great introduction to the world Otera and I want more of it! Like right now! I know this is suppose to be a series, but a title for the second book is yet to be announced, I will be keeping an eye out for it! 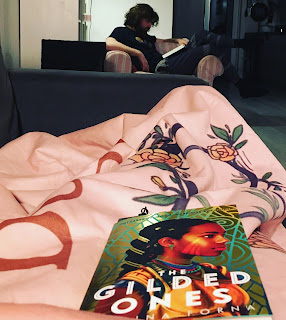 This book is an action packed, character driven story, set into a new world, we explore to the eyes of Deka. I love our main character, the worldbuilding, and the wide cast of side characters. This book is very well written and therefore I am giving it 5 stars!