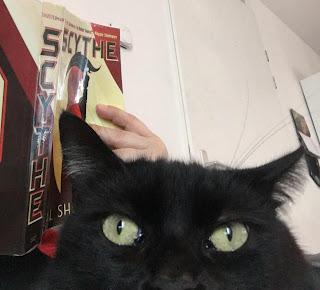 What if Death was the only thing left to control?
Maybe just read this sentence and get into the book, I really encourage you to go in bind. No still want to know more? alright then here is the rest of the synopsis:
In a perfect world, the only way to die is to be gleanded by a professional scythe. When Citra and Rowan are chosen to be apprentice scythes, they know they have no option but to learn the art of killing. However, the terrifying responsibility of choosing their victims is just the start.
Corruption is the order of the day and Citra and Rowan need to stick together to fight it.

Then they are told that one of them will have to glean the other..

My opinion about Scythe

Oh how I struggled ath the first half of the book. I was having a hard time getting into the writing style of this book, it took me about half the book to get over that. As you might be aware English is not my native language, and what I found with Scythe was that there were a lot of words that are not so commonly used throughout the YA genre, and so I sometimes had to look up some of the words mentioned. It has been a while since I have had to do that. I think that made it a bit challenging for me at times to get in to. In general it was not a difficult read, it is still very much a young adult novel, but if you are starting to read English I would not pick this as a starting point.

On the front of the edition I have of Scythe it says on the front: "A true successor to The Hunger Games". I don't really agree with this, I don't think this is a proper comparison as Scythe is so different in tone and world form the Hunger Games. Yes it is still science fiction, but not in the same category of the Hunger Games, which is a game based dystopian, where this is more a utopia instead. I would have like it to be compared to Matched if you want to compare it to something similar. Matched also is very much a utopia, and has some other similarities to Scythe as well. I think that if you are going into this book with the expectations of "another Hunger Games" that you would be very dissapointed. Scythe is a very different story, intellegent, political and at times a bit disturbing.

The first half of the book is a bit slow, it is mainly based on the training of Citra and Rowan our main characters. We get to see both Citra and Rowan point of view of their apprenticeship. The internal struggles of becoming a scythe and the dread of having to glean a person. To take a persons live, they both have very distinct voices and very different point of view on things. In the beginning I did not really like Citra, I found her to be a bit shallow and a bit of a know-it-all. But the farther we got in the book the more I came to appreciate her character. Rowan is a very likable character from the beginning, allthough during the book especially SPOILER ALLERT, when under the care of Scythe Goddard I actually started doubting is choices a bit.

I think the author made a very bold move at the end of the book, something I had not expected to happen. I do applaud the events and it definitely made me change my mind about this book. Now that I have had some time to process this book I think this book is a good set up for the rest of the series. There is a lot of world building, which is also the reason for the slow start, but I think the worldbuilding is necassary to explain to us the world we are in, to set up for the other two books in the series. And it is the set up for the events unfolding at the end of the book.

The ending of this book is action packed, full of surprises, and the beginning of a very interesting journey for both of our main characters. I feel the ending is perfect and this makes up so much for the slower parts of this book.

This is the kind of book that makes you think about our own world, our future and our incompetences. It makes you think that maybe we could all use a Thunderhead, a disease free world. Or would live then be come a dull experience? This book is a masterpiece, eventhought, at the beginning I felt like quitting a couple of times. It is such an interesting take on humanity and I am definitely going to continue the series. As I am writing this review I am already half through the second book, and I can already say, I am loving it! Utopia at it's best. As I was not all that fond of the beginning of the book, this influenced my final rating a bit, it is still a solid work of art. Therefore I am giving this book 4 stars.

It occurred to her that being a scythe was like being the living dead. In the world, but apart from it. Just a witness to the comings and goings of others. - Citra