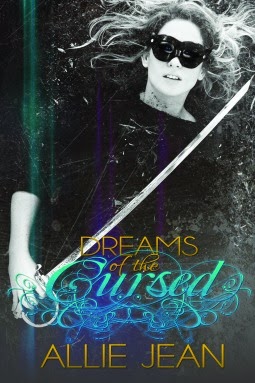 Remember me doing a blog tour review for the first book in the series? Back in July? No?
You can read it here: Click here.
I gave the first book 5 out of 5 skaters!

It was so exciting! I was so happy when I got the mail form the tour organizer that they were doing the tour for the second book I signed up right away!


About Dreams Of The Cursed

A violent war has waged in secret, underneath the notice of humanity since the beginning of time. Evil has pledged the destruction of humanity in spite of a power those that covet it could not possibly contain. Now the Warriors have inherited this fight and are honor-bound to rid the world of this ancient malevolence. By guarding the most precious, piercing light they possess—their female kin known as the Oracles, or Dreamers—the Warriors have a chance against the darkness.

Chantal Breelan has suffered from horrific nightmares for most of her life, believing something is wrong with her to have such visions of destruction. But when creatures of terror came crawling out of the shadows to hunt her down shortly after her eighteenth birthday, she discovered the truth.

Mathias is a descendant of a Fallen Angel and a powerful Warrior. He vows his life in service to pay recompense for the sins of their fathers by guarding Chantal from within the shadows. With Chantal’s life in danger, he was forced to reveal himself, yet she has managed to surprise him with her fierce tenacity and strength.

Now Chantal has picked up the reins of her birthright and stands by her Warrior kin, by Mathias. She’s on a mission to rescue others like herself. Yet, in this challenge, a battle of wits is exposed. New players are discovered, throwing strategies into question. When the truth comes to light, can Chantal hold her band of brothers together, or will they crumble under the weight of betrayal?

Wow, this book was even better than the first! This book is completely insane! It has the same amount of action as the first, lots of action and an intriguing story. This time we do get to know of the other characters a little better. For example Matthias but also Matthias's brother Titus.

We also learn a little bit more about Chantal's father Quintus and of course we learn the story of how they fell, and how they cope. I also loved the chemistry between Matthias and Chantal our two main characters. The story was told though various point of views, Chantal, Matthias, Damon (Chantal's evil brother) also we saw the story from one of the new characters.

My advise: read this book, well if you haven't read the first, go get it right now and start reading! You will not be disappointed! If you are looking for a book full of action, ancient battles between good and evil, a little spirituality (not enough to bother me), love, loyalty, and well developed characters you should really read this.

Oops I almost sound like some cheap ass commercial or something! I am just so excited about this book, it reads like a movie, the characters are great, there is an equal amount of horror, action, storytelling, and love to keep it interesting. You know those books were you get bored because it is moving very slow? Well this is not one of them!

Well after all this bragging, praising and ranting here is my rating: 5 skaters!!!!

This is the Warriors song, about being able to move through the shade, I thought this was a fitting song.
Posted by IceColdPassion at 8:39 AM