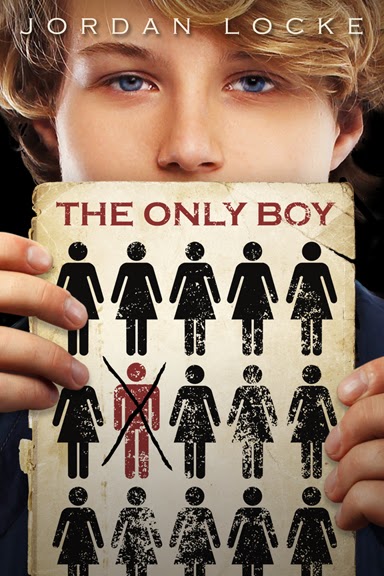 Mary is stuck in Section One, living with three hundred women in a crumbling hospital. She wonders what life was like two centuries ago, before the Cleansing wiped out all the men. But the rules—the Matriarch's senseless rules—prevent her from exploring the vacant city to find out.

Taylor's got a dangerous secret: he's a boy. His compound's been destroyed, and he's been relocated to Section One. Living under the Matriarch means giving up possessions, eating canned food and avoiding all physical contact. Baggy clothes hide his flat chest and skinny legs, but if anyone discovers what lies beneath, he'll be exiled. Maybe even executed.

Taylor should go. The Matriarch is watching his every move. But running means leaving Mary—and braving the land beyond the compound's boundaries.

Jordan Locke lives in Connecticut with his wife, two lively daughters and a well-behaved whippet. A graphic designer by trade, his creativity spilled over into the literary world. After years of writing, reading and learning the craft, his fifth novel, The Only Boy, brought him offers of representation from two well-known agents. Now, after the dog is fed and the kids are in bed, you will find him tapping away at the keyboard.


How I Came Up With the Idea for The Only Boy Usually, soon after I finish one novel, the idea for another comes, as if my mind automatically kick-starts in a new direction.

The concept for The Only Boy came a few weeks after watching the movie Children of Men. If you haven’t seen it or read the book, the gist is that babies have stopped being born, for some inexplicable reason, and the youngest living person is now an adult. This got me wondering what a world with only women would be like. How would they reproduce? Could they develop a technique to combine DNA from women to make more women?

After many years, centuries even, perhaps the women would no longer want men around? Maybe they would blame them for the disease that nearly wiped out humanity.

Introducing a boy into the mix would make the story more interesting, make the plot more complicated. Some of the women would want him dead. He would have to hide his identity.
I needed characters. Taylor, the only living boy, has just lost his family and friends, everyone he knew. Mary is an inquisitive girl with a yearning to learn more about life before the disease. The Matriarch, the figurehead for the group, is obsessed with making sure men never return. I tossed them together to see what would happen.

Of course, I thought the idea was totally original, but soon after I finished The Only Boy, I learned that the concept (just one living male) had been done before, in a comic book and a made-for-TV movie. It seems there are no new ideas, or at least very few of them. How many vampire books have been written? Avatar follows the same basic plot as Fern Gulley. Cinderella has been rehashed countless times.

A fresh take, however, can bring new life to the story. I haven’t seen the aforementioned comic book or made-for-TV movie, but I’m fairly sure The Only Boy is unique. Hopefully, my novel stands on its own.