Books: Eyes Ever To The Sky ~ Katie French 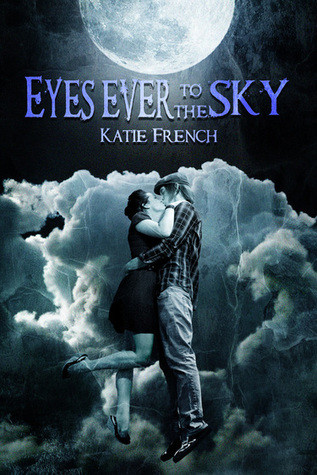 I received a copy via Netgalley for an honest review. This in no way influences my honest opinion.


About Eyes Ever to the Sky

When Hugh wakes up in a smoldering crater—no memory, no clothes—a single thought echoes in his head…trust no one. Frightened and alone, with no memory of who he is, he stumbles upon a grisly murder scene and is fatally shot.

He wakes, only to find he can heal himself. He has superpowers, and he’s going to need them. Desperate and bleeding, Hugh stumbles upon fifteen-year-old Cece, who’s got enough troubles of her own.

Between caring for her bipolar mother and trying not to get evicted from her run-down trailer, Cece may be the only person struggling as much as Hugh. Drawn to Hugh, Cece finds a love she’s never known. But when the real killer—a man-hunting beast—chooses another victim, Hugh and Cece realize they must unlock the clues to their past if they have any chance at a future.

Where to start with this review? This book is really hard to put in words or to form an opinion about this book. This book is just really an Ok read, it's nothing extraordinary good nor bad. There isn't anything wrong with it, but it doesn't read like a five star read. All though I must say that in the beginning it was a little slow, for my taste.

However the main characters: Hugh and Cece, were so interesting that you just want to continue reading. This book does not only contain great main characters, but there is also a bucket full of super great side characters to keep you entertained.

Cece is one of the strongest main characters I have met, she has a stronger role in this book than Hugh. Hugh or butt-naked-guy-from-the-sky as I like to call him, doesn't come of as strong. I think it might be because of the memory loss, but he also makes some very silly choices. For example, if you are starving, because you haven't eaten in days, you run into food under the most disturbing circumstances, say a murder scene. I would have still gathered some food before I ran away. That is survival instinct!

Cece seems to be the complete opposite doing what she needs to do, just to survive another day. She is struggling to keep the pieces of her life together, while one piece after another seems to break away. My respect and pity for her grew throughout the book. She's at the bottom of bottoms of society, which you do not read often about nor an easy place to live. What I also liked was her mom always talking in Spanish, it's different, and I like Spanish so big plus there!

This just popped in to my mind, because of the video. Enjoy!

Above, fire escapes clung to the sides of buildings. From this angle they looked like stairways to heaven. He started humming that tune under his breath an let his eyes slip back up to the stars. - Little Mack

Yet, deep down she knew she'd spend many moments like this one: hallow, heart-broken, and with her eyes ever to the sky. - Cece

Posted by IceColdPassion at 8:57 PM