On Stage: Fell Out Of Love Boy

On the 20th of October, it was time for another concert, after been to MIKA a month before, I travelled back to Amsterdam to the Heineken Music Hall to see Fall Out Boy. As usual I was very early, since if concerts are on my work days, like that Tuesday, I usually drive to Amsterdam straight from work (which saves me half an hour).

Anyways, I was early or so I thought, because when I got there the line was already very long. Which was kind of a surprise because I hadn't expected Fall Out Boy to have a huge fan base here in the Netherlands. Finally inside, I noticed all good places in front of the stage were filled, so for once I decided to head up to the seating area, from where I could see the stage perfectly from a distance. To be honest, it was a wise decision to choose seating because, for the first time ever I did not enjoy the concert.

Music to me is emotional, it makes me happy, sad, or just relaxed. Different music for me have different emotions. I used to feel something when listening to "Dance, Dance" or "This ain't No Scene This Is An Arms Race. I lived those songs, when they first came out. Thank you Fall Out Boy for at least playing all my favorite songs from the albums I like. All thought they were not received by the rest of the public like they should.

Usually when a band, take for example Flogging Molly which to me was the greatest example ever of this, plays and old well known song the crowd goes crazy. At this Fall Out Boy concert this was the complete opposite. Except from me, and a couple diehard (expected older) fans, the crowd got uneasily quiet. And of course it is not that strange if you think about it, the average age of the crowd was, 16 years old? If not younger. They were practically still in diapers when the first album released in 2003. So yeah that was kind of disappointing since it felt like I was the only one enjoying those songs.

I forgotten to mentioned, something else struck me as very peculiar. Partick Strump, who is the lead singer of the band, never addressed the public ever. I thought it was kind of odd, or maybe he is to shy to say anything? I don't know, but it came of a bit impolite. Pete Wentz, the bass player was the one who did all the talking.

The new songs are mwaah bad, as in I don't feel them. There was nothing, for the first time ever I got bored during a concert. Not that they didn't try, the show itself was great. They really did well with all the graphics, live video, so we, the people in the back could see much more than those little dolls on stage.

Some of the songs were a bit messy, they almost felt out of tune. Which is strange for a band that has been around a while.  Honestly, it was not for me, and I felt a bit out of place between those screaming girls, which is something I will never understand. 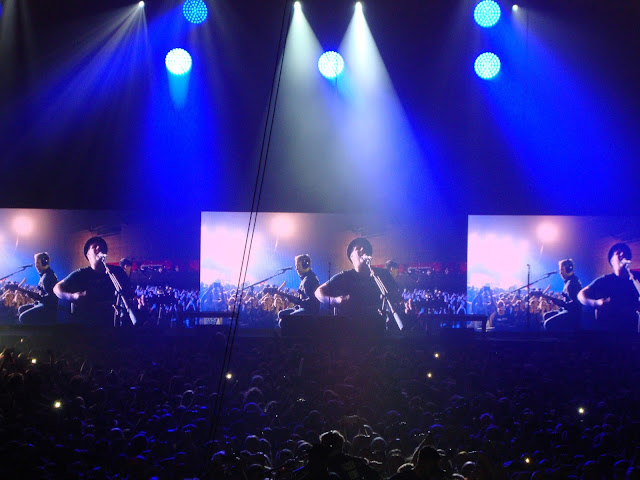 Posted by IceColdPassion at 10:57 AM

Email ThisBlogThis!Share to TwitterShare to FacebookShare to Pinterest
Labels: Concerts, Fall Out Boy, Music, On Stage