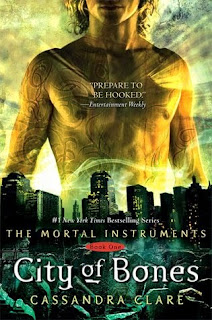 About City Of Bones

When fifteen-year-old Clary Fray heads out to the Pandemonium Club in New York City, she hardly expects to witness a murder― much less a murder committed by three teenagers covered with strange tattoos and brandishing bizarre weapons. Then the body disappears into thin air. It's hard to call the police when the murderers are invisible to everyone else and when there is nothing―not even a smear of blood―to show that a boy has died. Or was he a boy?

This is Clary's first meeting with the Shadowhunters, warriors dedicated to ridding the earth of demons. It's also her first encounter with Jace, a Shadowhunter who looks a little like an angel and acts a lot like a jerk. Within twenty-four hours Clary is pulled into Jace's world with a vengeance, when her mother disappears and Clary herself is attacked by a demon. But why would demons be interested in ordinary mundanes like Clary and her mother? And how did Clary suddenly get the Sight? The Shadowhunters would like to know...

The Dutch Netflix has been so kind as to add Shadow Hunters, the series based on the series written by Cassandra Clare. Of course as any book-junkie probably would, I had to watch this series. However because it has been a while since I read this book, I thought a re-read was in order before I started watching the series. The first time I read this book was back in 2014, however I never put an review up here on the blog until now.

Now that I have read the book a second time I thought it could use some feedback on my blog. I have not been posting much of anything of late. This was due to a massive blogging and reading slump. I could not gather my thoughts on the books I read, nor had the energy to put anything on my blog. I working on catching up and posting more regularly.

Back to the book, first time reading this I was in love with this book. I thought it was incredible, however even then I jolted down some critical notes in my notebook. First of some of the characters were just not interesting, annoying even. Any idea who I might be talking about? No, let me enlighten you, I am talking about Simon. Normally I am all in for the nerdy best friend, but Simon was just to annoying. I am sorry but he really is my least favorite character.

I also had some problems with our main character, Clary. In books I mostly like strong female characters, which is the opposite of Clary. I must say by the end of the book she really started to develop more and showed us some courage. At the beginning of the book not so much, which was a disappointment and also let to some annoyance.

What I did like about Clary is that she was not this perfect person, which is refreshing to see. This also makes the story more realistic. Clary has some great self reflection as well, she knows that she can be a little helpless, and you will feel the same way at that moment. She is also insecure and thinks she is not that beautiful.

The world Cassandra created is truly fascinating, and this book is full of action. This is something I like very much about it. I am definitely going to continue with this series even thought it did not blow me away.

For anyone who hasn't read this yet, can't imagine that there are a whole lot, since as usual I am late at this party, this book is worth your time. Lots of action, interesting characters (not all but some), amazing world-building and kick-ass shadowhunter. As I said before it did was not mind-blowing like some books, therefore 4 skaters.