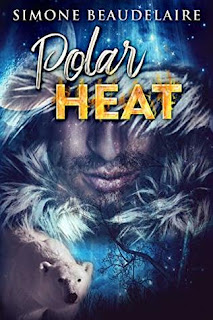 Polar bear shapeshifter Russell Tadzea is content with his rather isolated life in a small central Alaskan town. He has friends, work and a congenial, yet cautious relationship with his family.

That is until the arrival of a kindergarten teacher from the lower 48 blows Russell's comfortable world to pieces. One whiff of Riley Jenkins' compelling scent, and Russ is a goner.

But how can he explain all that he is to this innocent young woman? And will her own dark past interfere with their ability to turn a fated love into a happily-ever-after?


My Thoughts on Polar Heat

So sometimes I like to browse Amazon for freebies, because I am a Dutch person and we like thinks cheap.. Just kidding who doesn't like to read something for free? And hey, if it is any good the author will definitely get a review from me. I am guilty of hoarding freebies when ever I feel the need to buy an insane amount of books, that I don't have the money for. I have a very big kindle libary to choose from, almost all that is on there are books that are written by indie authors, a few I have bought, some I won in giveaways and some were kindly gift review copies. Last year I decided I was not going to read all the ebooks I owned and decided to clean out my kindle, it took me about a week to get from an insane amount to a less insane amount of books.

Every once in a while when I feel like I am going in a reading slump or I just want to read something short that I can finish in a day or sometimes I just want some smut with my books. I go to my kindle and select something at random, that peaks my interest. This time I was in the mood for something smutty and romantic, because well I just finished two YA books, (Scythe and Crown of Midnight) and was just not feeling like continueing with the series, like I should be doing.

So I decided to find something short to read, something sweet, something wait a minute is that a polar bear? Is this about a Polar bear shifter? That sounds cool, let's go in blind, and so I did, and I don't regret a thing. Because this novella was actually very well structured, and was much more than I would have imagined could be in only 185 pages.

The beginning is a bit slow, we get to know our main characters Russell and Riley. The first 7 or 8 chapters are told from Russell's perspective, and I had been wondering all the while if the perspective would shift to Riley, as I want to get her perspective as well. Luckily it did shift but not as often as in some of the romance books I read, it felt very natural when we did shift perspectives.

It was also very clear who we were following because men are men, with a bit of a dirty mind. What was also great is that Russell took it slow with Riley, he felt like there was something in her past that if he pushed too hard she would run in the other direction. There was a lot of consent, going both ways, and I liked that it was there. It made Russell such a patience and wonderful character.

What was interesting about Riley's character that she seems like a normal human, however she has a special ability as well. She can Dreamwalk, this concept was very interestinga and it gave the story another dimension. I really love how the story evovled and that ending, wow, that was really intense! I was expecting an appearance of Riley's past but damn that was a good ending.

Then there are of course the romantic scene, oh who am I kidding, the smutty scenes the sex scenes, whatever you want to call them but they were good, so sexy! Loved it!

I love polar bear shifters now, and dreamwalkers, eventhough the concept scares the shit out of me. This was a great read, it had all that I was looking for, polar bears, Alaska, snow. Just what I needed and much more, because I had not expected dreamwalkers. That was a really nice suprise. All in all a good story, if only it were longer!