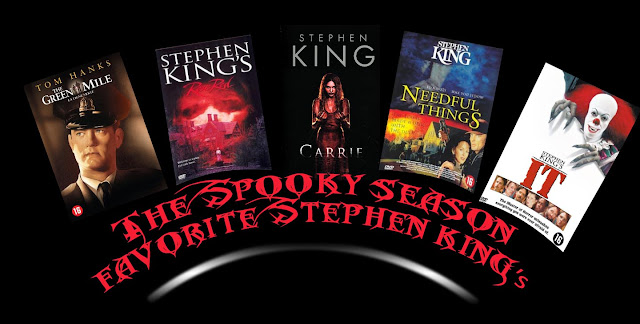 HAPPY HALLOWEEN EVERYBODY!!!
So we are closing off this Halloween month with a bang, today I am sharing with you some of my favorite Stephen King movies. And there will be something for everybody because not all of these are very scary, I think of Stephen King more of the king of dread, he just knows how to very subtly set a very atmospheric setting and slowly fill it with a good all portion of dread. Most of the time I just am a bit creeped out, more than really scared. I have yet to read a Stephen King book, I know I should have already, I just don't know where to start. That will be a discussion for another day.
Let's get into the movies. 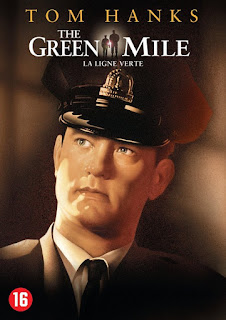 The Green Mile is I think the least scarry movie on this list, it is one of my favorite movies of all time. It think you all have heard about the Green Mile. I this is one of Tom Hanks best roles. The movie is about the Green mile, which is the name for death row at Cold Mountain Penitentiary, this is were the worst of the worst should be. And yet we find a gentle soul within the walls of this prison. Someone who isn't suppose to be there but was at the wrong place at the wrong time. I am talking ofcourse about John Coffey the gentle giant with supernatural powers. The Green Mile is the story about John Green, about how he ended up on death row, about Paul Edgecomb the warden is trying to figure out why John Coffey is there, and struggling with his own live, his believes. It is such a beautiful story. If you haven't watched it I would really recommend this, even if you don't like horror. This movie only just touches on the supernatural, it is more a character driven story. The supernatural is not the main focus. 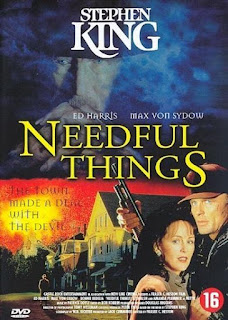 This movie, has stuck with me like glue. It has been years since I have watched it, but it still remains one of those movies that I for certain never will forget. It is such a clever story, about a new store owner, that comes to a tiny town. That concept is ofcourse being frowned upon, in a town where everybody knows everbody. I like the mayhem that almost destroys the town. It is a fascinating movie, and I think I should really read the book I looked it up, it is going to be a long as read at leat 800 pages, so that is kind of scary on itself. I am very curious if you ever seen this one, and what your thoughts are on the movies. 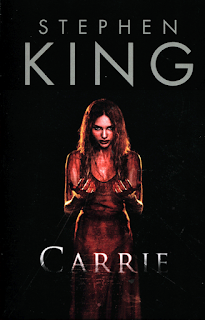 So we are going from least scary to scariest Stephen King today, Carrie is boadering on scary, but for me not too scary. I have seen both the remake from 2013 and the orginal movie from 1976 and I would recommend watching them both because they are both amazing! It has been a while since I have seen the 1976 version. So I am going with the 2013 one for now, and I really enjoy that they had chosen Chloë Grace Moretz to play Carrie, because she plays the insane, very very well. This is really a facinating on how religion and ignorance can drive people insane. The unknowning, the uneductated, and how this results in extreme situation, and mental abuse. I have always found this movie fascinating and love rewatchig it. I like that they have chosen a modern time setting for this movie. It is great to see that even in a more modern setting this movie the theme still works, and still holds value. This movie is more a psychological horror, than anything else. It doesn't have jump scares, and it doesn't have a whole lot of supernatural elements to it. It is like Needless things the horror that people inflict on each other. One critique to the ending of this movie, it is over the top 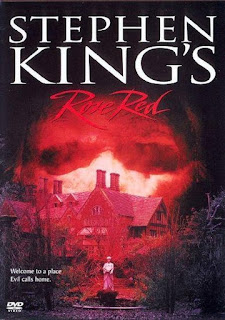 Warning this one does contain jump scares, and pretty effective once I might add. I think of all the Stephen King movies I have seen, this is by far my favorite. I just love the mansion, that is Rose Red, the history they created around it. The story is very well crafted. The down side is, that this is a really long ass movie. It is I believe around 3 hours long. The mansion is so incredibly beautiful, and the characters and events that happen make it that it doesn't seem so long. Some of you might not have the patience to sit through three hours of film, I just wanted to know if any of them would survive and how the story would ended. 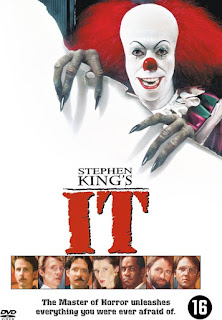 Finishing this list off with my moms least favorite movie of all time, the reason she hates clowns so much.IT! So I grew up with not liking clowns and I thought that if I ever were to watch It I would be too scared to finish it or maybe I would hate clowns as much as my mom does. Surprisingly enough I very much enjoyed this movie, ofcourse it has all the makings of a great horror, and yes it has jump scares, a complicated plot, grose scenes, and of course a very creepy clown with razor sharp teeth. This is also a really long movie, when I looked it up I noticed it was considered a mini series. That explains the length of the movie. I stil have to watch the remake with Bill Skarsgård as Pennywise the clown. I heard that it is different from the mini series, I am curious what they changed. Then there is the question will I ever attempt to read the book? For one it is over a thousand pages long and I am not sure how I feel about reading this kind of horror. I might get stuck in it. So I am not sure, should I attempt it? Let me know what you think?