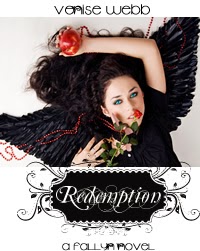 This is the story of two soul mates connecting under not so bright circumstances. The story of Fallyn aka Piré aka Piredia, an angel, fallen angel and the mother of all vampires. Fallyn has made many grave mistakes in her life, which gotten her dragged  back to hell, to be released to clean up her own mess, but will she succeed?

She is send to a town called Redemption, where she finds herself running from her soul mate, Shayne. Shayne is your typical football playing average but gorgeous teenager, and he is falling hard for the new girl at school.  However, Fallyn is not interested, since she has to clean up her mess.
But when they finally finish their soul mate connection, all hell breaks loose. The mother of all demons was released from hell, to bring destruction to the world.

Fallyn and Shayne find themselves at the edge of an epic war between good and evil.

Nade: A hellhound, friend of Fallyn.

Lillith: A succubus, the mother of all demons.

Puck: A trickster, likes to mess with people's heads.

This book is one of the most exciting angel/demon stories I have read so far! The story not only revolves around the two soulmates, but also adds some of the side characters such as Adia, Sophie, Brice and Lillith, which makes it a round story.

This book made me laugh my ass of with all the sarcastic one liners, the Chemistry between Shayne and Fallyn  and the great world Venise has built around these characters. A world full of demons, angels and humans, where a balance is kept between them. The book also made me cry twice, its was so heartbreaking, and made me want to slap one of the characters.

You never know where the story is going, wondering about what the motives are for lilliths release, the strange man in the cabin, the bigger play at hand. Its a mystery solved through out the book! I can't wait for the sequel!

Oh I almost forgot! I always try to make a music suggestion, of course as mentioned in this book multiple times was Adele! Anything by Adele really would be fitting. So here is Make You Feel My Love, which very much reminds me of the story of Fallyn and Shayne.

The song that hit me as the Fallyn and Shayne theme song of their love was however not an Adele song. I would go with Soldier by Gavin DeGraw! It's fitting!

Posted by IceColdPassion at 10:30 PM