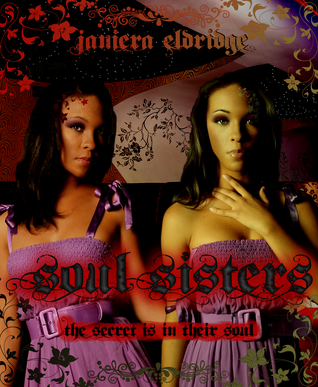 Soul Sisters is an urban fantasy novel about African-American twin sisters Ani and Dana who have a rather unique secret: one sister is human while the other is a vampire. While the sisters have lived peacefully with each other for many years one fateful night will change both their lives forever. When a drunken man tries to attack Dana (the human sister) Ani (the vampire sister) protects her sister with all of her ferocious power.

However, when the vampire’s leader Donovan finds out about the public display he calls for the sisters to be assassinated for disobedience. Ani and Dana now are in for the fight of their lives to protect each other as well as the lives of their dedicated friends who have joined them on their mission for survival. If Dana and Ani can make it through this time of uncertainty, Ani can take her new place as vampire queen. Soul Sisters is expected to be a trilogy; The book also features a multicultural cast of characters that brings a new edge of chic to the vampire world.

Well lets start with the uniqueness of this book, because it really is a unique and refreshing new vampire story. Not only  the fact that the main characters are African American, which I haven't seen before, well yeah I believe Twilight has some multi-culti characters in the last book, but other than that I can't think of any. (This was not a Twilight comparison just a statement, lol) But also the fact that vampires are not made by biting the victim and giving them vampire blood, which is the usual approach. This brand of vampires is made from part of the human soul of the twin sisters. However, the details of the process were a little vague, but maybe we will get to see how it works in the next book. Bind the two together and you have one unique vampire story.

I liked most of the characters, especially Christian (and his choice of music The black Keys, oh yeah). He's a werewolf which are the natural enemies of vampires, but he fell in love with Diego's sister, who got decapitated for this "crime". Diego and Christian stayed friends.

The character I liked the least was Dana, I found here to be very shallow, also I would have like to see her freak out or something with all that is happening around her, she shows little emotions apart from wanting to barf. All that Dana is lacking, Ani has plenty of.

Ani was great vicious, with a temper, but also pretty smart which is something I like about her. I love Diego and Ani together they are a great couple even though we don't yet know much about their past (the same goes for Christian and Marcel which we don't know much about either).

Then the ending, which was not what I had expected, and thinking back, I was actually a bit disappointed. I was expecting a fight, and didn't get one. For me it didn't add up because the characters described Donovan as an almost unbeatable force of nature. Instead they found a wrinkle old shell, which sounded nothing like Dana described him when she encountered him two weeks before they found him. I don't know what brought on the sudden change.

So my conclusion, this book could use some more depth, but it has GREAT potential. The characters were enjoyable, the world new and refreshing, which makes this a 3 Skaters Read!!! I am looking forward to reading the next books! Hopefully some of the questions I have get answered!

Black Keys ~ Gold On The Ceiling


The Black Eyed Peas ~ My Humps

Posted by IceColdPassion at 1:37 PM