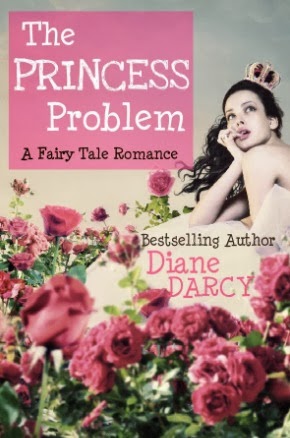 About The Princess Problem

In real life, she’s given up on the fairytale ending...

After having her heart broken twice, Alicia Dayne has sworn off men, decided to concentrate on her career, and is delighted to win a lucrative contract to make a commercial for Highborn Mattresses.

She could make the most awesome fairytale commercial ever, except for Jonas Highborn, who isn’t exactly thrilled with her Princess and the Pea ideas, and really doesn’t want a prince in tights representing his company.

Though he’s trying to keep his grieving mother happy by letting her have charge of the commercial shoot, and though Alicia’s trying to keep in mind that this annoying guy is her boss for the moment, they can’t seem to keep from clashing.

First of all, I have been having trouble getting those reviews written, I don't know why, since I have actually been taking notes for awhile. Which by the way is new for me, I never use to take notes in the past, but then again I didn't read as much as I do know. Another one of my problems is that I keep forgetting the characters names, not so convenient  if you are trying to write a review! Anyways let's try this again.

I read this book on a relaxed saturday afternoon. I didn't know what I wanted to read, just found Vrolijk Hart, which I finished in about an hour, and I was craving for more shorter reads and came across this fun little novella.  And this was just the kind of story I needed at that moment. A fairy tale, well a modern fairy tale. Thinking about it, it kind of reminds me of A Cinderella story, you know the one with Hillary Duff and Chad Michael Murray, well minus the high school drama.

This is definitely not a high school story, although there are no sex scenes in this book. Yes I am just calling it as it is, it is true though, this is a clean romance story. The main character Alicia just landed her first big project, designing a promotion champagne for Highborn Mattresses. Which is cool, I like the fact that she's a hard working starter, which I can relate to easily because I am just started my first job. Even though Mrs. Highborn was just looking for a date for her son, the business was still a major player in this story. It was not just a background detail, which made the story realistic.

And of course there was the romance, the emotions growing on both sides. Alicia not being aware that he was flirting with her, which was hilarious. Also the bantering between Alicia and Jonas gave for a lot of hilarious moment throughout the book.

All in all I must say that I have enjoyed this story very much even though it might have been a little bit cliche, at the moment it made my day! Therefore I rate this novella 4 snowflakes!