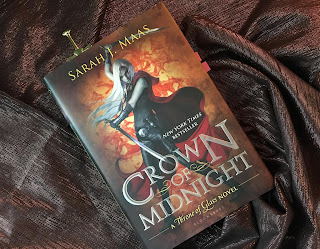 About Crown of Midnight

She is the greatest assassin her world has ever known. But does she have the heart of a killer?

After a year of hard labor in the Salt Mines of Endovier, eighteen-year-old assassin Celaena Sardothien has won the king's contest to become the new royal assassin. But Calaena is far from loyal to the crown. Keeping up the charade - while pretending to do the king's bidding - will test her skills in an entirely new way. And it certainly isn't the only point of confusion for the young girl. Because though she's made her choice between Dorian and Chaol, the ways of the heart are never simple...

My thoughts on Crown Of Midnight

Lest dive into the depth right away. The first half of the book, is rather slow, it is building up to the second half of the book which is very fast paced, and full of action. I think it is a bit of a contrast with the first book, where we got used to all the action, around every corner there was something happening. This was more strategic games, politics and a bit of mystery. I think that if you were to continue straight from the first book into the second one, you will need to adjust abit to the new approach. It slowed down considerably, but I really enjoyed this book, eventhough the pacing was very different I love the political intrigues, the multiple perspectives we see throughout the story. And that ending! Amazing! And I kind of went in a reading slump from there.

There is one part of the book that I really hated and it is sort of the best part of the book as well. One of my favorite side characters dies. It made me cry a bit, I just couldn't help myself. And since this book was a re-read for me I was dreading these pages, as I actually don't like how Celeana's responds to the death of her friend. She get's very unreasonable, and in honesty a bit annoying. She goes to the extremes and it at the end of a the book being a pain in the ass and becomes the reluctant heroine. Don't get me wrong, I get were she is coming from but the way she responds to this death, and again pushes everybody who cares about her away, is just a bit of an overreaction in my opinion.

At the end of the book Celeana is leaving for Wendell, I hope that in the third book she stops running away from her fate, and starts picking up the battle axe, once more. I am very curious to learn more about the fae, this will only be my second series I have read with fae in it. The other series being of course the Mercy Thompson series of which I posted my review of Iron Kissed at the beginning of the year, which is ofcourse an urban fantasy, so in that sense very different. I don't know much about fae in young adult, so I am curious to find out.

I needed some time to adjust to the slower pacing, but that ending, that made up for the entirety of the book. It was so well done. I loved the minor character Mort who is an enchanted doorknob he was so funny. I think story wise we see a lot of character growth, interesting politics and a bit of a mystery to figure out. The outstanding ending of a book, made this into a 5 star read for me.