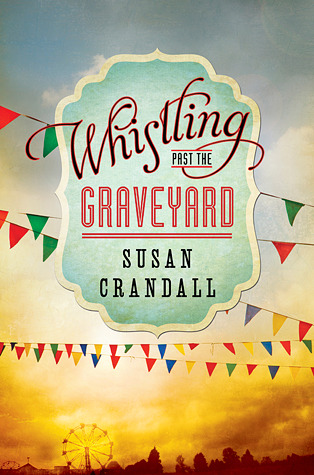 About Whistling Past The Graveyard


The summer of 1963 begins like any other for nine-year-old Starla Claudelle. Born to teenage parents in Mississippi, Starla is being raised by a strict paternal grandmother, Mamie, whose worst fear is that Starla will turn out like her mother. Starla hasn’t seen her momma since she was three, but is convinced that her mother will keep her promise to take Starla and her daddy to Nashville, where her mother hopes to become a famous singer—and that one day her family will be whole and perfect.

When Starla is grounded on the Fourth of July, she sneaks out to see the parade. After getting caught, Starla’s fear that Mamie will make good on her threats and send her to reform school cause her to panic and run away from home. Once out in the country, Starla is offered a ride by a black woman, Eula, who is traveling with a white baby.

As the two unlikely companions make their long and sometimes dangerous journey, Starla’s eyes are opened to the harsh realities of 1963 southern segregation. (Source: Goodreads)

This is one of those books you will always remember, one of those that opens your eyes, tells you a little bit of the history of America, tells you that racism has always existed even in the sixties which was the era of peace, hippies and equality in the Netherlands.

I never thought that there would have been such poor conditions for the coloured people, in the sixties. This book was told from the perspective of a 9 year old girl, at various point in this story I though a nine year old could not have that many bright thoughts or is not that perceptive, but the longer I think about it the more it fits. Children are more perceptive and keen then  people think.

I loved Starla, she is smart, loyal, and but with a temper. But she is also really sweet and caring, especially when it comes to Eula. She also grows with the story, seeing thing no white nine year old would ever see. She starts to realize that there are big differences between how the white and black people are threated in Mississippi.

Eula must have had the toughest live a black woman could have had, but the way she cares about Starla and baby James is astounding, even with the load see carries she managed to be a mom for Starla, show her what a mother is suppose to act like. The moments spend in the kitchen together baking those were great scene, of happiness.

This book, is very well written, a great surprising, intriguing, moving story. It tells you a piece of history from a unique point of view. The relationships that develop throughout the story are realistic, and the characters are relatable.  I couldn't  have given this book anything less than five stars.

Same reason some white folks slam the door when the see I'm colored Some folks don't see nothin' but your skin. It ain't right, but it's the way people are. ~ Eula to Starla

No one could have done things you've done to protect Starla and James if she wasn't strong. You're strong, so strong. Something changed on Eula's face. "You think so?"

"My daddy says that when you do somethin' to distract you from your worstest fears, it's like whistlin' past the graveyard. You know, making a racket to keep the sacredness and the ghosts away. He says that's how we get by sometimes.

You fight for what's right. There's nothin' to be ashamed in that. You take care of James and me when we need it, even when it'd be easier to just leave us. I see that you a beautiful person inside - most beautiful I ever met.

Buy this book on Amazon

Posted by IceColdPassion at 10:17 PM