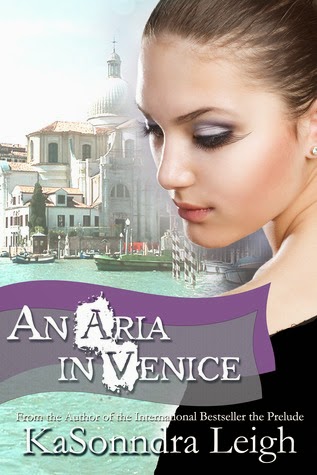 
About An Aria In Venice

KaSonndra know how to wrap you around her finger within the first pages of the book, after that you are hooked and you are not willing to put down the book any time soon. So if you decide reading this book please make some room in your schedule so you do not have to put it down because that is nearly impossible.

An Aria In Venice it's setting is the beautiful country of Italy, (no suprises there you can figure out that much by the title alone). However we do not spend all our time in Venice, we also see a bit of Milan again (of which we saw much in the first book The Prelude). I loved the first book so much that I rewarded it with 5 stars, you can read the review here.

Where The Prelude is story of Erin Angelo and Alex Dostov, we know get to meet Adriana Dostov. Who we also met briefly in The Prelude, but just as a side character. Of course we do not only get to know Adriana a little better, but we find out that Luca is quiet an interesting character as well.

This book touched me, it made me feel thinks I haven't thought about nor felt for years. That feeling of being in love, that first kiss that made you forget. It gave me some clarity about my own (currently non-existant love) life as well. You will fall in love like Adriana and Luca fall in love.

This book also has it's wide range of well developed side character, the most memorable and striking side character is Simona, Luca's mom. The way she deals with her illness and her view of life and death is quite interesting. Everytime she enters the room you know you will be touched by her words.

And that letter to Katarina, Adriana's mother well it is just outstandingly well put and it made me cry. This is the perfect book for a beautiful sunny lazy day.

But it really should come with the following warning label:


Warning!:    Will give and immediate desire to book the next flight to Milan or Venice!

This book will leave you breathless, with its divine characters and beautiful background this books is a real page-turner. 5 stars for yet again an outstanding book by KaSonndra Leigh.

„ I beg you, from one mother’s heart to another, do not turn your back on such a jewel. For one day you will be dancing in the dark like I have been and you will need such light as she possesses. To frighten the ghost as they surround you.” - Simona

The above quote brought tears to my eyes, such a powerful piece of writing.

„ Behind us the waters of the canal swoosh gently to the rhythm of our breaths mixing together, creating our very own music… an aria, as my ballerina calls a short song that stays with you forever, affecting you in such  a way that each muscle, every bone, every single organ in your body falls under its spell.” ~ Luca

I know I know, Santana, Spanish right? But this is so Luca, I see him walking up down the streets of Milan this tune playing in the background like it is his song.

This is the only song I could think of that even came remotely close to what I was looking for, which was Italian classical music, which I know there is a lot of, but the problem is that I do not know much about the Italian classics. Suggestions are of course always welcome.

Posted by IceColdPassion at 8:13 PM