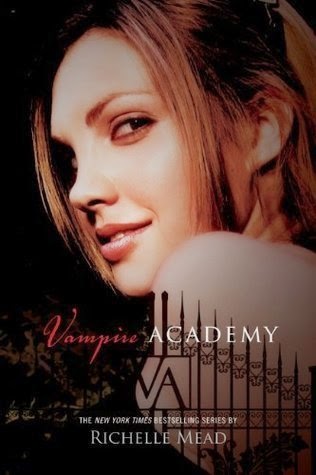 About The Vampire Academy

St. Vladimir’s Academy isn’t just any boarding school—it’s a hidden place where vampires are educated in the ways of magic and half-human teens train to protect them. Rose Hathaway is a Dhampir, a bodyguard for her best friend Lissa, a Moroi Vampire Princess. They’ve been on the run, but now they’re being dragged back to St. Vladimir’s—the very place where they’re most in danger. . . .

Rose and Lissa become enmeshed in forbidden romance, the Academy’s ruthless social scene, and unspeakable nighttime rituals. But they must be careful lest the Strigoi—the world’s fiercest and most dangerous vampires—make Lissa one of them forever.

I absolutely devoured this book, from the start this book was full of action, and it never got boring. There were lots of plot twists and turns, you just do not see coming sometimes. Who doesn't want to read a book like that?

By the way, this was not the first book I read by Richelle Mead, I read Succubus Blues, way before I ever started on the Vampire Academy. This book however is not for the young adult audience, but more for the adults. You can expect a review on this book somewhere this year since I will be re-reading it before I start reading Succubus On Top, which I bought a while ago. I read Succubus Blues back in 2012, so I do not remember it all that well.


Lets focus on The Vampire Academy now, since that is the book I am suppose to review here. This action packed first book in a series of 6, also holds another important factor. Great main characters, Rose and Lissa, are to opposites, however their friendship goes a long way. Rose with here witty comment, sometimes creates hilarious moments. Where as Lissa is more serious, while she has to deal with the Moroi politics and backstabbings which are quite interesting.

Really the political games the Moroi play would make a lot of politician jealous. Lissa wears a mask of kindness most of the time, which also takes some toll on her personally. Through the link Rose and Lissa share, we find ourselves in Lissa's head as well. We get to know her well, even though the story is told from Rose's perspective.

Now, we haven't even discussed the hot, love interests of the girls, Rose's Dimitri, which is a really really forbidden love. Then there is Lissa's Christian, which is even more fun then Dimitri. I think I like Christian more because he is highly sarcastic and full of self-mockery, which is also my area of expertise.

This book hits the spot, we get the good guys and the bad guys, romance plus a mystery to solve. It is addictive as hell. This can only mean one thing: 5 skaters. Put them in your pocket Richelle! Well not your real pockets ofcourse, with the sharp blade and all. Don't want you to hurt yourself.

Jesse swallowed, eyes wide. None of the bravado he usually showed was there. I guess there was "usually"  and there was being held in the grip of a really ripped, really tall and really pissed of Russian guy. ~ Rose


Posted by IceColdPassion at 9:54 PM