Books: Behind The Scandal ~ M.A. Stacie 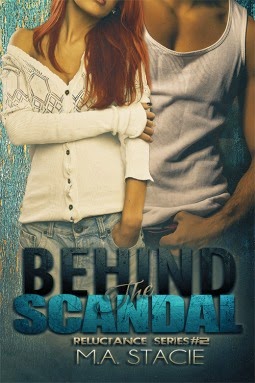 About Behind The Scandal

Sent to the family ranch to overcome his addiction, Taylor Reese is angry and hurt. Feeling rejected by his father and brother, Taylor throws himself into ranch life to help him forget. But it isn’t long before it hits him hard how much his life has spiraled out of control, leaving him floundering and looking for a lifeline.

Libby Karlin is cautious, wary of Taylor’s presence. Her dark past makes her reluctant to let anyone near her family. But after Taylor strikes up a friendship with her son, Libby finds herself drawn to the sadness within him. His experiences are no secret to her, though she keeps her own buried until a knock on her door has her gasping for breath.

Could dealing with their pasts really give them a future?

This is the second book in the Reluctance series. The first book in the Reluctance series, Beneath the Surface, I once found on Netgalley. I decided to requested hoping my request would be approved. And the publisher did, I was very excited about this, so I started it very soon after. I am so glad I found the pearl of a book because it was truely amazing. I gave Beneath The Surface 5 skaters!

In the first book, we meet, Dale Porter and Kyran Reese. One of the side-characters of this book was Kyran's brother, Taylor. In the end we see how Taylor hits rock bottom. Now we find him as the main character in Behind The Scandal, and see him climb out of the immensely deep crater, where he had landed by the end of Beneath The Surface.

I was very excited and intrigued, by the fact that the author choose to tell his story. I hated, yes really hated Taylor in the first book. Behind The Scandal really changed my perspective of Taylor. And by the end of the book I even started to like him.

Then there was of course Libby, she has a secret we do not know much about, and she really hid it quite well. By the ending of the book we finally got to know what had happened to her in the past. The ending kind of reminded  me of another great read, Safe Heaven by Nicolas Sparks. Not that it bothered me that it was similar or anything.

This book was much more realistically written then the first. Except the way Taylor dealt with his drug addiction, that is not something, I do not think many addicts are capable of. This book did not have the "mind-blowing" factor that the first book had. Nonetheless, it was splendidly written and very sweet. Therefore 4 skaters.

Taylor frowned, speaking to his retreating uncle. "Is Candy another on of your friends then? Like Libby?" Josh lifted his hand, batting away the comment. "It's a horse, dumbass. And that horse will leave hoof-shaped bruises all over you if you don't get to work."

"I need new, clean memories. You can give me that. You can wash away the past." ~ Libby

I was listening to some music a while ago and then this song came on from one of my favorite artists, Paolo Nutini. The song is called Better Man, it suits the relation between Taylor and Libby well.  You will understand once you have read this book.

Posted by IceColdPassion at 4:33 PM