Books: Beyond The Seduction ~ M.A. Stacie 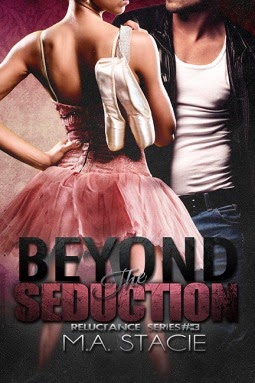 Read about the author,  read an excerpt or enter the giveaway: here

About Beyond The Seduction

For a man who thought he had everything, Trace Jacks sure has nothing now. After one letter blows his life apart, Trace is clueless how he can move on. He stumbles through the days, never accepting the grief that flows within him, and finding it easier to bury his loss.

To him, if he doesn’t think about it, then it never happened. Burying the hurt, he continues with his new life. Hiding from the truth becomes a lot easier after he takes his niece to her dance class, striking up an interesting conversation with her teacher.

Shae Bennett is happy to keep things fun, enjoying Trace’s seduction and his spontaneity. She’s reluctant to get serious with anyone; she has enough going on in her life. With him she can forget about her concerns for her mom, her tumultuous relationship with her father, and stress of running the dance studio. With him she can be herself, and it becomes all-consuming.

When the fun begins to slip, when reality starts to encroach in the worst possible way, their relationship unravels at an alarming speed. Neither one is willing to end what they’ve come to need so deeply, but each of them has issues that can only be dealt with alone. Can Trace and Shae unhook the chains that hold them back? Is their newfound love strong enough to battle back to one another?

Wow, this book really messes with your head. That is kind of, my first thought when I started to wonder about how to best write this review. This book is about Trace Jacks, at first the name did not ring a bell all-though we have met him in the first book as Dale's brother.  He must not have left a big impression on me since I could not remember him.

Sorry Trace, but I am just not that great with names. I sometimes write down all the important characters names in my notebook, so by the time I start my reviewing of the book I have not forgotten them. When I read Beneath The Surface, I just started out blogging, and did not carry around a notebook, to pen down whatever thoughts  I had about the book. I think it was also one of  my first Netgalley reviews.  Anyways, I have come a long way since then, so lets get back to the reviewing part.

It was only yesterday that I posted my review of the second book of this series, Behind The Scandal,  which was about Taylor (much more memorable character of book one), I ended up giving this book 4 skaters.

This book was again a totally different experience, Trace and Shae are both into the arts. Trace being a musician and Shae being a ballerina.  All-though we only get to see Trace play once, which is a pity, we do get a lot of ballet. Something I do enjoy reading about, ballerinas got some flair and are very motivated. I see these traits reflected in both Lisbeth (Shae's mom) and Shae.

I love the way they run the dance school together. The relationship Shae has with her mom is great, they are best friend. It is very similar to the relation I have with my own mother. However what happens next is rather confronting. It got me thinking how I would feel if anything happened to my own mother.

The love between Trace and Shae is one full of passion (much like that of Dale and Kyran). It has that effect on you, were you get all gooey and almost melt of the couch, if you were sitting on one that is. You will surely catch fire.

Let's start with the perfect ending which I haven't even talked about yet. I have not read many an ending as perfect as this one was. Also I think this also means the ending of this splendid series, as that is how it appeared to me.  This book is a fast read, full of well developed characters with their own problems to solve.  5 skaters!

"Sometimes," he said, " verbalizing things to the people closest to you is the most painful."

Being alone with Lisbeth had never bothered her. Sometimes it felt like she lived with a friend instead of her parent. Many of her school friends had been jealous of the freedom she'd had.

Posted by IceColdPassion at 10:07 PM