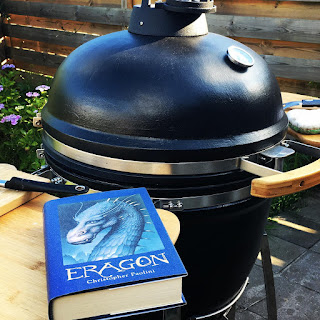 One boy...
One dragon...
A world of adventure.
When Eragon finds a polished blue stone in the forest, he thinks it is the lucky discovery of a poor farm boy; perhaps it will buy his family meat for the winter. But when the stone brings a dragon hatchling, Eragon soon realizes he has stumbled upon a legacy nearly as old as the Empire itself.
Overnight his simple life is shattered, and he is thrust into a perilous new world of destiny, magic, and power. With only an ancient sword and the advice of an old storyteller for guidance, Eragon and the fledgling dragon must navigate the dangerous terrain and dark enemies of an Empire ruled by a king whose evil knows no bounds.
Can Eragon take up the mantle of the legendary Dragon Riders? The fate of the Empire may rest in his hands.
(from: Goodreads)

My thoughts on Eragon

I received Eragon I think as a birthday present, I remember starting to read it and immediately falling in love with the story. After many many years I thought it would be a good time to do a re-read it, why did I love the story so much when I firsts read it?
So last year I have re-read Eragon and let me tell you, I still love it as much as I did before. This may be due to the fact that I forgot about half of the things that had happend like for example when did Brom lose his live? Did they save Arya before or after that? Did they managed to kill the Ra'zac or not?
These were all things I forgot about which is not really strange because I think it has been at least 6 years since I first read it. In Eragon the author takes the time to set the tone for the rest of the books, there is a lot of world building and character development in this book, which not at all takes away from the story.
What a really appreciate in this book is that the author took the time for the characters to grow, take for example Saphira, she didn't turn into a big ass dragon overnight (like they made it look like in the very badly done movie), but she grew over several months and in the beginning was not able to touch upon Eragon's mind, nor was she able to fly. This whole process took about half a year I think in the book. I really appreciate the realistic approach.
Also we get to see the town's dimensions of Carvahall, the role Eragon plays in the town, we meet many side characters that will be important for the plot in the later books. I really liked Horst and his family. And of course Brom, I think he is my favorite side character in Eragon. He is mysterious and a great teacher to Eragon.
This book can be slow at times but there is enough happening in these pages that will blow your mind, I think it is not the best book in the series, but it is a great introduction to Alagaësia, I hope to read the other three books somewhere during 2021. I really want to finish this series, as I remember that the third book leaves us on a major cliffhanger. The reason I never finished it was that I think the last book was not out yet, and when it came out, I was not in a great reading place. I might not have been reading at all.
Hopefully 2021 is the year were I finish series, any serie will do, I have a couple more I would like to finish this year, for example The Curse Workers by Holly Black. Anyways back to Eragon.

Great start of a series, love the world, the creatures and the characters. How could I not, it has dragons! I love me some dragons, and Saphira is witty, caring and beautiful! This is for fantasy lovers, I don't think it will appeal to people who are not familiar with epic fantasy. If you don't like original world building, elves, dragon's and other creatures, this will not be for you, but in case you do, this is a great place to start when you are new to epic fantasy. It is written for a young adult adience but can easily be read by adults as well. All in all this book is really close to my heart, it will forever be a favorite and I really am hoping the ending of the series will be satisfying.

The real courage is in living and suffering for what you believe.
- Eragon ~ Christopher Paolini, p. 197