Hamish Kenneally is moving from Australia to the US for a fresh start, starting with Christmas at his sister’s place in Idaho. When a snowstorm diverts his plane to Montana and leaves him stranded two days before Christmas, he hires a car and drives right into a blizzard.

Ren Brooks has always called Hartbridge, Montana, and his family hardware store, home. After a few failed attempts at love, he’s resigned to being single forever—after all, no guy wants to stay in his sleepy little town for long. And after his dad’s passing earlier in the year, Ren’s Christmas is looking bleak. But when a car runs off the road in front of his property, Ren pulls the driver out and takes him home to get out of the cold.

With the storm and the holidays leaving Hamish with nowhere else to go, Ren kindly offers a place to stay. Hamish is certain he’s crashed right into a Hallmark Christmas movie, despite more car delays and road closures and the prospect of not seeing his sister for Christmas. And with help from Hamish, Ren is beginning to feel a little Christmas cheer.

These two unlikely strangers have more in common than they first realise, and after two days of Christmas decorations, cookies, and non-stop conversation, it looks like Christmas might be saved after all.

Hi everybody, I just want to drop you all a note as to why I joined in on this book blitz, first of all I love the cover it looks so cute, definitely something I would go for when I am looking for a holiday read.  It just gives you the holiday vibes. It actually sounds a lot like the Christmas movies I generally pick out however, honestly characters in the movies are always straight, sorry I am not against gay romance, or anything but there is just not a whole lot of gay Christmas romance movies I have come across. Tell me if there are any on Netflix. I would be interested to watch it.
Anyways, back to the book, I read the excerpt and I am wondering if they could have picked a bit of a cheerier part of the book, this sounds a bit whiny, I can understand that this is the beginning of the book where the main character has hit it's all time low but it could have been interupted as very annoying to read, I am still interesting to see how the story progresses, eventhough we are off to a rough start. By the way Christmas on the beach? This is very hard to imagine for someone who get's buckets of rain at Christmas. I would love to find out where the story goes, I am there for all the christmasy romance! Let me know your thought about the excerpt in the comments, will you be adding this to your christmas list?

What is a totally catastrophic, unmitigated disaster, you might ask?

Let me break it down for you real quick.

My life, my relationship, my job, my plans, my future, and this whole damn trip.

I am the totally catastrophic unmitigated disaster.

Hamish Kenneally, thirty-one-year-old Australian, who quit his shitty job and sold his shitty apartment and left behind his shitty life in Sydney, packed his said-shitty life into two suitcases, and boarded a plane to spend Christmas with his sister in God-knows-where, Idaho, USA.

Well, Christmas first. Then two years, at least, in America trying to unshitify his life.

And if the trip to said God-knows-where, Idaho, was any indication of just how spectacularly extra-shitified my life was going to get, I should have turned around and stayed right where I was.

Because if the flight from Sydney to LA was bad, which it was, then the second flight, LA to Spokane, made the first flight look like a joy ride.

Because I didn’t get to Spokane, did I?

Because you see, Christmastime in America is in winter. Which is weird enough for this Australian. Christmas should be hot summer days at the beach, seafood and salads, beers and watching the bronzed surfers and drunk foreigners at Bondi. That is what Christmas should be.

None of this “sorry folks; to avoid flying into a massive snow blizzard, we’re being diverted to Missoula, Montana” crap the captain of the plane said when we were halfway there. Like the screaming baby in the seat next to me, or the vomiting lady in the row in front of me weren’t bad enough. Like we had any choice about which direction we were flying into.

I had no choice. I was now going to Montana. In a freaking blizzard, of all things. Ever been on a plane that flew into a snowstorm? There is zero joy in that kind of turbulence, believe me. It would also explain the screaming baby and the vomiting woman. And the man behind me saying Hail Mary’s . . . which you’d think might be comforting. But oh boy, is it ever not. Especially when he yelled the prayer every time we hit a particularly large pothole in the sky on the descent. Honestly, if this flight was a scene in a movie, you’d think it was too ridiculous to be real.

After the plane landed—to which I would have clapped and cheered like everyone else if I wasn’t stuck in the brace position after trying to kiss my own arse goodbye—we were kicked off the plane without so much as a good luck in the wrong bloody state.

So there I was, a clueless Aussie, after flying for twenty hellish-hours and now a few hundred kilometres from where I was supposed to be, trying to wrangle two overweight suitcases down the concourse, when one little wheel on my suitcase broke.

Because of course it did.

Frazzled and trying not to cry— Yes, cry. A thirty-one-year-old man can cry; shove your toxic masculinity in your cakehole and stop judging me. I was having a jetlag-fuelled shitastic day meltdown, trying to keep my shit together the best I could, and clearly not doing it very well. I was allowed a little saltwater leakage.

Anyway, getting back to my story. I tried to call my sister.

Because of course there’s not.

So, taking a deep breath and willing myself not to spiral, I found my car rental kiosk. Finally, something is going right. “I have a car booked,” I said, trying to keep my now-broken suitcase upright with my foot while rifling through my backpack for my booking confirmation and driver’s licence. After dropping my passport and half the contents from my backpack all over the floor, then scrambling to collect it all while still trying to keep my suitcase upright, I handed everything over with a flourish of triumph. “Oh, that flight was the worst,” I said, sagging onto the counter. I was about to tell her all about my day from the ninth circle of hell when she looked up at me with that look.

You know the one.

The look of superficial appeasement before they cut you off at the knees. “I’m sorry, sir. But I don’t have a reservation under your name.”

I stared at her. My brain short-circuited and the will to live left my body. It was an actual out-of-body experience, I’m sure of it. I could see myself staring at her, mouth gaping like I’d been lobotomised.

Because of course they didn’t have my booking.

Why would they? My rental car was waiting for me in Spokane. In Washington. Not in freaking Montana.

“Oh,” I whispered, and my left eye twitched. “That’s nice.” I looked around the airport, at the line of annoyed people behind me. “Excellent. I’ve seen that movie where Tom Hanks lives in an airport. It wasn’t so bad. Could be worse. Could’ve been the one where he’s stuck on the island, I guess. Though I didn’t pack a volleyball, so that would’ve sucked.”

She blinked and tap-tap-tapped away at her keyboard. “But sir, we’ve had a lot of cancelled flights today because of the weather. I can arrange a vehicle for you, if you’d like?”

Oh, my sweet baby Jesus in a manger, why didn’t she lead with that?

N.R. Walker is an Australian author, who loves her genre of gay romance. She loves writing and spends far too much time doing it, but wouldn’t have it any other way.

She is many things: a mother, a wife, a sister, a writer. She has pretty, pretty boys who live in her head, who don’t let her sleep at night unless she gives them life with words.

She likes it when they do dirty, dirty things… but likes it even more when they fall in love.

She used to think having people in her head talking to her was weird, until one day she happened across other writers who told her it was normal.

She’s been writing ever since… 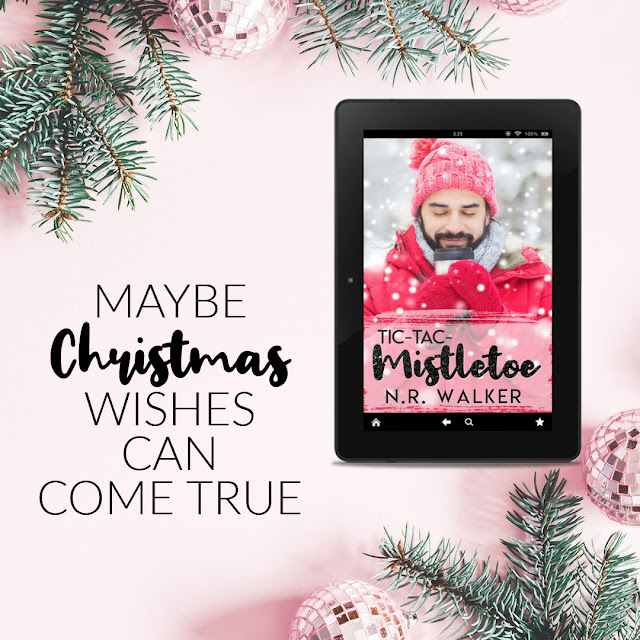