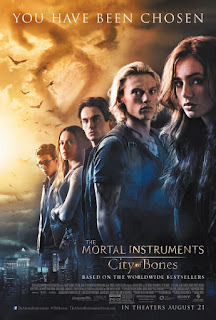 About The Mortal Instruments:

When her mother disappears, Clary Fray learns that she descends from a line of warriors who protect our world from demons. She joins forces with others like her and heads into a dangerous alternate New York called the Shadow World. (Source: IMDB)

I actually do not often discuss movies based on books on my blog, simply because they always suck, one way or another. Either they turn the plot around, change entire cast, or just make it into a big Hollywood thing. Today I will get into it though because I am wondering if you ever feel the same way about these kind of movies.

The thing is while watching this movie, the movie playing in my head was actually not so much the movie but the book. This movie just reminds me of what I have read, even though it has been years since I last read the book. So yeah I rather enjoy watching this movie. Yes I watched it to many times already, no it does not keep to the plot of the book. They have changed many details, for example the ending, they kept the motorcycle, just not the one you would have expected.

I think that if you have not read the book, this will still be an ok movie. I don't think it will be the best urban fantasy you will ever see, but it is not bad either. I always feel that these kind of movies are a bit rushed. There is lots of action, werewolves, vampire, and shadow hunters to keep you entertained. The plot is a bit of a mess, but you will get the hang of it by the end of the movie.

For the readers:
- If you read this book already, but didn't watch the movie, it wouldn't hurt to watch it. Keep in mind though that we are dealing with Hollywood, so no fat or average people (such a pity). Also they did change some major things in the plot.

- If you have already read the book and watch the movie. What are your thoughts on it? Does it also remind you of the book? What did you think of the characters?

Posted by IceColdPassion at 9:52 PM