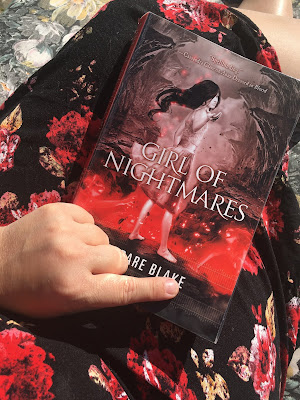 About Girl of Nightmares

The events of the previous book leave Cas, Carmel and Thomas, shaken. Anna is gone, but is she really? When Cas goes out hunting again things do not go smoothly, Thomas and Carmel barely make it out alive. And Cas is left to doubt his sanity. Has he really just seen Anna, with them in the barn with the other ghost?

Cas is unable to let Anna go, he wants nothing more than to bring Anna back, save her from the hell she is in. But everything comes at a costs, will they all make it out alive?

I have read Anna Dressed In Blood twice, I absolutely loved it, even though I have a bit of a struggle with our main character Cass. Cass, really is not the most likable character. In the first book this did not bother me as much, we really get to see the relationships develop between Thomas, Carmel and Cass, and a great set of side characters.
Cas in this book actually reminded me of Catcher in the Rye, the main character in Catcher in the Rye is also not my favorite but I still very much enjoyed the book. Cass, is really whinny, emo and overall very pushing everybody around him away. Of course this can be the result of the grief he feels over loosing Anna, but really get the hell over yourself. Death is a natural part of life at least this is how I see it.
Instead of getting over Anna he decides to get her back, after she appears to him in the middle of a battle with another ghost. On the one side, I can get into the I need to save her from the Obeahman however, the lengths he goes through to achieve his goal are questionable.
As you can see I have some mixed feelings about Cas, not so much about Thomas and Carmel, I think they are the saus that makes the potatoes taste better, in this story. I love both characters and there are some really great scene. Like when Cas and Thomas go visit his aunt. This scene was hilarious.
Suicide Forest is my absolute favorite part of this book, it was great, scary but damn good writing! It had me at the edge of my seat the entire time. It also reminded me of the Suicide Forest in Japan, which is a dark tourist attraction.
I have had doubts throughout the book about Cas and the choices he makes. The choice he makes in the end of the book, is worth sitting through the cringe worthy choices he makes throughout the book. I am very satisfied with the ending. I am wondering though if the author is thinking of continuing making this book into a series, as there are still enough loose ends there that can be explored. Or maybe a spin off series about some of our side characters I would love to know more about Gideon.

I had a lot of issues with Cas, however the horror elements in this book, were fantastic! Might I say even better than in Anna Dressed In Blood? The Suicide forest, made up for a lot of crap in the book, the pacing at the beginning of the book was really slow, which mad me struggle even more. All in al I do love the overal setting, the horror and it still reads like an episode of Supernatural. I just cannot get over Cas, and this has influenced my rating, making this an 3 star read, instead of a 4 star read.
You should have been nicer Cas!