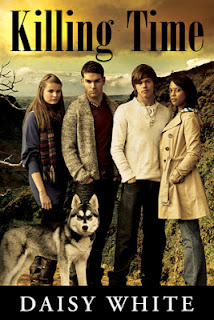 …Sometimes doing your duty can be the hardest thing of all…

Seventeen year old Alia finds herself mysteriously drawn to the new kid in school, Zac, and she knows it isn’t because of his sporting prowess, or even his good looks; this is deeper, and freakier. What with the death of her dad, and a terrifying stalker watching her house, life is pretty tough. Then one night, everything changes again, as a phone call sends her and her mom running for their lifes.

Alia’s discovers she is part of the Time Guardian Family, a legacy from her father, and having turned seventeen, is ready to take on ‘Family’ duties. But she won’t be the only one; there are always four at any one time.

Alia, Zac and the two other Guardians Cloe and Jake are thrown together in a little dessert town in the middle of nowhere. The Family is gathering, which can only mean one thing; the end of a cycle of time, and the latest generation of Time Guardians must prepare to reset the Clock of Deep Time.

But someone else has discovered the Family secrets; Mars Petersen, leader of apocalypse cult Avera Moon is determined to use the Time Guardians in his own plans. But is it chance, or can he really know April fourteenth could be the end of the world?

As the final countdown begins the modern day ‘Family’ must outwit Mars Petersen and his followers, and reset the Clock of Deep Time to save the world.

First of all, I don't think I have read any adventure books in like, years! I think the last was a Dutch book called Pinkeltje which was when I was a even littler Irene (with 1,53 meters I am still defined as a little person I think). I do watch a lot of adventure movies such as the Mummy, Tomb Raider, National Treasure or The Librarian, all favourites of mine. But adventure books? (looks over the shoulder at my bookshelf) Fantasy, more fantasy, non fiction, cook books, uh nope no adventures.

The thing about this book that pulled me in was the cover, there's a Husky dog on it! Another favourite, lol. I was very curious about the dog having any part in the book. And luckily he did, he's named Oreo, his owner is Alia.

I enjoyed this book, I liked Alia she's a little shy, overweighed, insecure which makes her different in a good way. She is not the perfect long legged girl you read about in other books. Then there is her opposite half, Zac popular, athletic, self-assured.

The story is told from both Alia's and Zac's point of view, but Jake and Cleo are the once that make this story totally great! Cleo who always speaks her mind and can be very bitchy. And Jake, the quiet Emo boy, the only thing he really wants to do is find his father. The contrast between all four characters, is what makes the characters realistic and easy to relate to either one or all.

Another reason why this book deserves a 3.5 rating is that there aren't many grammar issues, which I have encountered in other indie/self-published authors works! So, that's great for all the grammar snobs out there :).

Posted by IceColdPassion at 9:42 PM