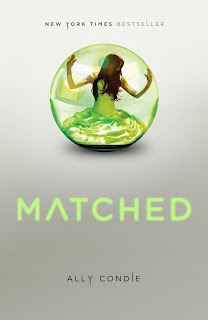 Cassia has always trusted the Society to make the right choices for her: what to read, what to watch, what to believe. So when Xander's face appears on-screen at her Matching ceremony, Cassia knows with complete certainty that he is her ideal mate... until she sees Ky Markham's face flash for an instant before the screen fades to black.

The Society tells her it's a glitch, a rare malfunction, and that she should focus on the happy life she's destined to lead with Xander. But Cassia can't stop thinking about Ky, and as they slowly fall in love, Cassia begins to doubt the Society's infallibility and is faced with an impossible choice: between Xander and Ky, between the only life she's known and a path that no one else has dared to follow.

I have been putting this review of for a while, since I am not entirely sure what the heck to tell you about this book. I mostly know what I want to say what I liked or disliked about the book, but this one left me with lots to think about.
I struggled with this book, I almost didn't make it to the end, but I am to damn curious not to finish, and the ending was worthwhile! The last hundred  pages is where everything was finally put in motion. Finally Cassia becomes the "rebel" we have been waiting on throughout the book.

Well that's it, this book at first was a 3 stars for me, but considering the ending, how it made me think about the world, and the beautiful cover made me re-rate it so 3.5 stars!

Cassia: They are giving us pieces of a real life instead of the whole thing. They have perfected the art of giving us just enought freedom; just enough that when we are ready to snap, a little bone is offered and we roll over, belly up, comfortable and placated like a dog

Cassia: I realize now how much courage it takes to choose the life you want, whatever that might be.

I think this would either be the theme song for Soceity or on of the 100 songs!! Enjoy!
Dit nummer is of het thema nummer voor de Unie of een van de 100 liedjes! Geniet er van!

Posted by IceColdPassion at 9:37 PM