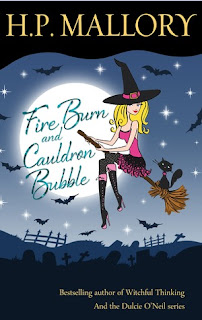 
About Fire Burn And Cauldron Bubble

Life isn't bad for psychic Jolie Wilkins. True, she doesn't have a love life to speak of, but she has a cute house in the suburbs of Los Angeles, a cat and a quirky best friend Christa.

Enter Rand Balfour, a sinfully attractive warlock who insists she's a witch and who just might turn her life upside down. Rand hires her to help him solve a mystery regarding the death of his client who also happens to be a ghost. Jolie not only uncovers the cause of the ghost's demise but, in the process, she brings him back to life!

Word of Jolie’s incredible ability to bring back the dead spreads like wildfire, putting her at the top of the underworld’s most wanted list. Consequently, she finds herself at the center of a custody battle between a villainous witch, a dangerous but oh-so-sexy vampire, and her warlock boss, Rand.
(Source: Goodreads)

Jolie:  The story is told from Jolie's point of view only. Jolie is such a character, she reminded me a bit of Bridget Jones (in the movie, I haven't read the books, shame on me I know), minus the overweighted part. Jolie also gets into those strange and awkward situations which made me laugh out loud. Also she doesn't believe she is a witch nor that she has an incredible power.

Rand: He is the to-die-for warlock, secretive, strange in some ways and very protective of Jolie. Although he has trouble explaining himself, nor does he seem to know what he wants. I think he fights a lot of battles in his head. This makes him an awesome character.

Christa: The remarkable thing about Christa is that she doesn't seem to be bother by the fact that the underworld exists. She walks inside a room filled with vampires, werewolves, demons, witches and warlocks without hesitation. She is a wonderful side character, also she is from now on my favourite bookish best friends!

Sinjin: Oh Sinjin, a vampire and a very old one at that. I am still not sure what his motives are. He is Always the gentlemen when it comes to Jolie. He's hot, a real ladies men but in a way that is very charming. I liked the conversations between Jolie and Sinjin, mostly because of the language use. He turns out to be a pretty decent vampire.

The first thing that made me want to read this book was the funny cover. It promised laughing out loud, which was a promise that was kept! I laughed a lot which was good, the subject matter was light, not many shocking event that want to make you cry nor emotionally draining.  Just a quick light read!

The story some journey! with lots of bumps, magic, hot man, wicked witches, thirsty vampires,  funny ghosts on the way. At least it didn't have a major cliffhanger on the end pfiieew! I will continue this series, I am curious what the author has in store for us in the next books! I hope lots of fun!  All in all  I just enjoyed this story very much. Great characters, worldbuilding and writing! So that means 4 stars!

This song describes the relationship between Rand and Jolie. It also made me think of the scene where Jolie will have to defeat an faerie.

Posted by IceColdPassion at 10:04 PM