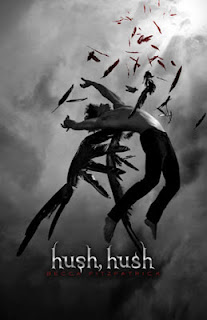 Romance was not part of Nora Grey's plan. She's never been particularly attracted to the boys at her school, no matter how hard her best friend, Vee, pushes them at her. Not until Patch comes along. With his easy smile and eyes that seem to see inside her, Patch draws Nora to him against her better judgment.

But after a series of terrifying encounters, Nora's not sure whom to trust. Patch seems to be everywhere she is and seems to know more about her than her closest friends. She can't decide whether she should fall into his arms or run and hide. And when she tries to seek some answers, she finds herself near a truth that is way more unsettling than anything Patch makes her feel.
All the things she has never dreamed of being real are crashing down on her, entering her world without permission. It all seems to revolve around her, will she be able to make the right decision in the end?
(Source: Goodreads)

Nora: The story is told from Nora's point of view. Nora is an average teenage human girl. Or that is what she things. Turns out she's only part human in the end.

Patch: Is a fallen angel, who wants to become human more than anything else, until he meets Nora. He is the big mystery, and remains a mystery until the end of the book. I still would like to know more about Patch especially about his past. Patch was the only character I really liked in this book, and kept me entertained.

Vee: Nora's best friend, I found her a bit (more than a bit) naïve, she trust complete strangers and doesn't listen to her best friends advice. She falls head over heels for Jules (seems a bit instant).

Elliot: Is the other new guy in school, the transfer from the private school. He seems to be the villain in the story but turns out to be a victim. But of what...

Jules/Chauncey: We don't see much of Jules, although it is Elliot's best friend, but he leaves Elliot alone with Vee and Nora most of the time. It left me wondering why and we will find out in the end, I will tell you one thing: He also isn't entirely human!

This was not what I expected it to be, I read a lot of promising reviews, seen a lot of positive reactions on good reads about this book. But I didn't get emotionally attached to this book, like I do with lots of other books.

The character that got me through this book was Patch I liked him because he was a mystery. Nora however, made the story difficult for me. She seems emotionally unattached, in various scenes of the book. Even the love between Nora and Patch seems abstract to me, this is why I didn't like it as much as some other books.

Although it is not mind-blowing, it is a real page-turner, it is easy to read, but sometimes the timeframes and scene-endings are a bit confusing. It is an ok start of the series, but I hope the other three books will be better. Hopefully we will get to know Patch a little better. I am curious about his past, so for me: More Patch and less Nora!

One last thing the cover is beautiful! And glittery! The Dutch cover however, is very ugly, I wish they used the same cover for the Dutch translation.  So  3 stars for a great cover, Patch and the surprise factor in the end!

He accepted that statement with a nod.

"Do you want to possess my body?"

"I want to do a lot of things to your body, but that's not one of them.”


“Tell me what's going on here. Why can I hear your voice inside my head and why did you say you came to school for me?"

"I was tired of admiring your legs from a distance.”

Posted by IceColdPassion at 10:27 PM