Books: Off Series: Off Limits & Off The Record ~ Sawyer Bennett 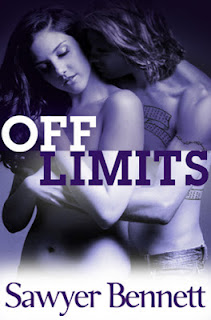 Two years ago, Emily Burnham, had an epiphany about the shallowness of her life. And she made it her mission to become a different person…a better woman. Out from under the controlling thumb of her mother, Emily is tasting the real world for the first time. And she likes it.

Nixon Caldwell has served his time in the Marine Corps, surviving two brutal tours in Afghanistan. He is back home, surrounded by what he likes best…isolation. It's certainly the best way to avoid confrontation of the consuming guilt that is weighing him down.

An accident brings Emily and Nix together. Emily is ready  to give him all, but can she reach him? Can she reach the part of his soul that he has deemed to be Off Limits? 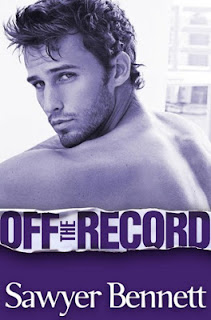 Ever Montgomery suffered the ultimate betrayal by the one man who she should have been able to count on for anything. It has left her hurt, jaded and incapable of forming relationships, but it also means that she can spot a liar a mile away. These traits are earning her a reputation as a reporter with a keen nose for a good story and a complete understanding of the extreme power of the written word.

Lincoln Caldwell, is the hot goalie for the New York Rangers. At twenty-four and a rising star, he works hard and he plays even harder. He’s gorgeous and carefree—the ultimate charmer.
When Ever publishes an article about Linc containing information that she received off the record, she finds herself on the receiving end of the athelete’s fury. Rather than basking in the glory of exposing Linc as a shameless user of women, she finds herself at his mercy when he demands and receives retribution. Required by her editor to trail Linc for six weeks, Ever is forced to look at the real Linc Caldwell.

These synopsis look promising, but at first I didn't see the connection between the characters from the first book and the second. But when I thought about it, Emily Burnham is ofcourse Ryan's sister! (See yesterdays review: Here)Then I went looking for the connection between the second and the first book. And I think Nixon and Lincoln must be brothers or at least family because they share a last name! I am curious if we will see anything of Ryan and Danny in the second book! I have this on my shelf so I will be reading it soon!
The third book will be published in June, 11th, 2013!

Posted by IceColdPassion at 7:44 PM